Skip to content
You are here:HomeGovernment Services How to Apply for the Philippine National ID 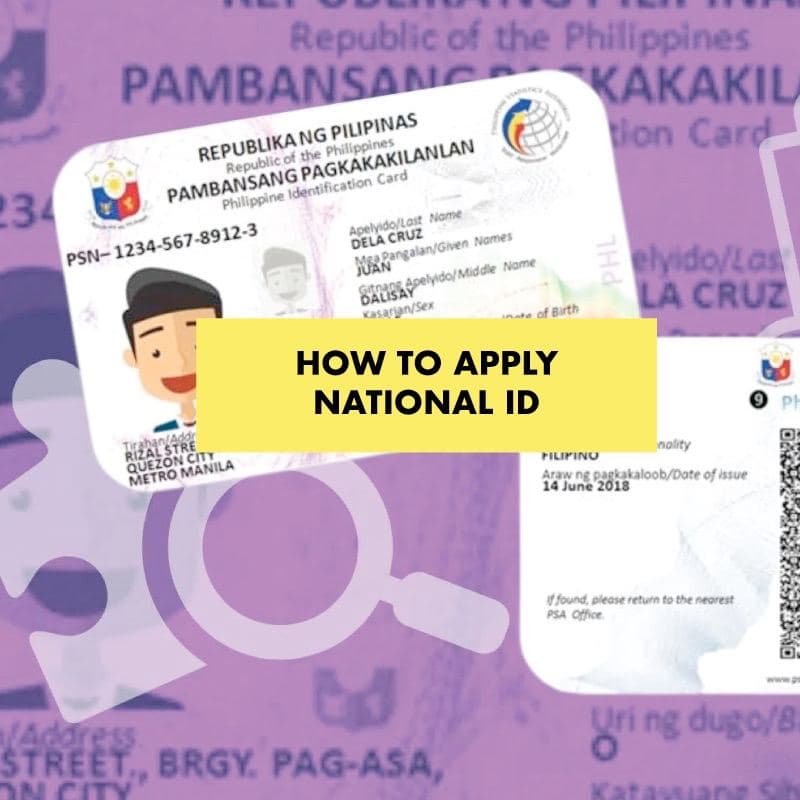 What is the PhilSys ID?

The PhilSys ID is a non-transferrable card that will serve as a person’s proof of identity when making transactions, both in public and private sectors. It is based on the Philippine Identification System Act (Republic Act No. 11055), which was signed into law by President Rodrigo Duterte. The new system is carried out by the Philippine Statistics Authority (PSA).

The goal of PhilSys is to establish a single, national identification system — not only for those in the Philippines, but Filipino citizens abroad, as well. The system will also include foreign permanent residents in the Philippines.

That being said, the PhilSys ID will NOT replace existing IDs, particularly those that are issued for specific purposes, such as driving licenses (for drivers), and passports (for travelers).

Notably, the PhilSys ID will have no expiration date for Filipino citizens. For foreign permanent residents, however, the ID will be valid for one (1) year only.

How to Apply for a PhilSys ID

The PSA, together with Local Government Units (LGUs), government agencies, and the private sector, has begun establishing fixed and “mobile” registration centers nationwide for the purpose of PhilSys ID registration. This involves three (3) major steps, as follows:

STEP 1. The first step involves the collection of demographic information, such a person’s name, gender, date of birth, place of birth, blood type, and address.

STEP 2. The second step involves the capture of biometrics, such as the person’s photograph and fingerprints. During this stage, supporting documents will also be validated.

STEP 3. The third step refers to the issuance of a PhilSys Number (PSN) and PhilSys ID, which will be sent via Philippine Postal Corporation (PHLPost) to the person’s given address.

NOTE: The entire process, from registration to issuance of the PhilSys ID, is free of charge. The physical ID itself is also free for all applicants.

During registration, applicants will be asked to show an original copy of at least one (1) of the following primary or secondary documents.

On April 30, 2021, the PSA launched an online registration platform for those who would like to apply for a PhilSys ID. More than 51,600 people were able to register through the website, although it is currently being updated due to technical difficulties.

In the meantime, the PSA continues to conduct house-to-house visitations in select provinces nationwide, as part of STEP 1 registration. Meanwhile, around 6.4 million people from 32 priority provinces have already finished STEP 2 registration.

There you have it! Aside from serving as proof of identity, the PhilSys ID will certainly make it more convenient for people to access various services. To learn more about the national ID, the requirements for application, and registration locations — visit the official website of PSA at https://psa.gov.ph/philsys or Facebook page at https://www.facebook.com/PSAPhilSysOfficial.